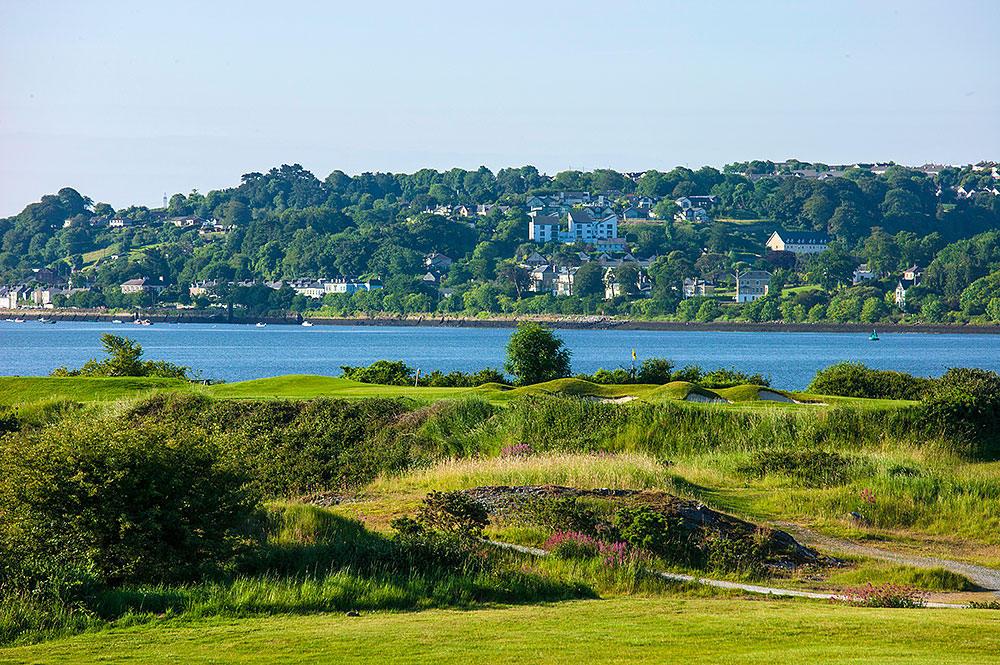 Cork GC was formed in 1888 by prominent Cork businessmen. The first location was at Rathcooney Hill above Glanmire village. Thereafter, several moves were made while searching for a better site. The present location at Little Island was chosen in 1897 when Messrs. Maudslay, J. H. Gubbins and Sharman Crawford spotted its potential while sailing in the adjacent estuary.

Initially, the members laid out just four holes along the shore amongst what were still working limestone quarries, owned by the local Cantillon family. To allow play, many craters had to be filled with waste stones and top soil, producing a fast draining, links-like turf; still an attractive feature to this day. A club house was built shortly afterwards near the present eighth tee.

In 1898 the ambitious club appointed a professional, David Brown, from Edinburgh who was destined to remain with the club until his retirement in 1926. It was he, who in 1901 with some external assistance, created an extension to nine holes.

Not content with these nine holes, within a short time thought turned to extending the course to eighteen. Harry Vardon then in his prime as a professional with four victories in the British Open behind him, was invited over in 1909. In addition to playing an exhibition, his opinion was sought on the suitability of lands, known locally as ‘The Park’, which had become available for lease and were being considered by the club for the extension. Despite the embarrassing fact that as a professional he was forbidden entry to the club house, Vardon approved the concept and David Brown was tasked with the new design which came into play by 1911. A fine new clubhouse was also constructed on the newly acquired lands.

After World War 1, the club decided on a major upgrade entrusting it to Alister MacKenzie, then considered the most creative golf architect in Britain who subsequently created such masterpieces as Augusta National, Cypress Point, Royal Melbourne and Pasatiempo. He proposed entirely new holes, created new greens and, radically, installed sand filled bunkers. The design incorporated his signature undulating greens, large and free-form bunkers and substantial contouring. On completion in the summer of 1925 the course measured 6,200 yards with a par of 78. It received widespread publicity and favourable comment when the club hosted professional tournaments in 1925 and 1926 together with the Irish Ladies Close Championship 1928, won by Agnes Dwyer, prominent Cork Golf Club lady member. Then, followed the Irish Professional Open in 1932 and the Irish Amateur Close Championship the following year. The MacKenzie-designed layout closely resembles the course in play to this day.

The club house was destroyed in 1945 owing to a fire. An impressive replacement was designed, built and opened before the end of 1946, a remarkable achievement at this time of post-war austerity. This in turn was refurbished in 1968 and completely redesigned in 2001 which is the fine clubhouse of today.

Recognising the progression in golf technology an up-grading proposal presented in 2010, by the well-regarded architects Hawtree Ltd, was sanctioned. This included re-modelling all tees to American USGA standards, re-landscaping and more significantly re-bunkering to more faithfully reflect the original MacKenzie design concept. The ambitious program was successfully completed in 2013. The revamped course is now a worthy challenge for players of all standards.