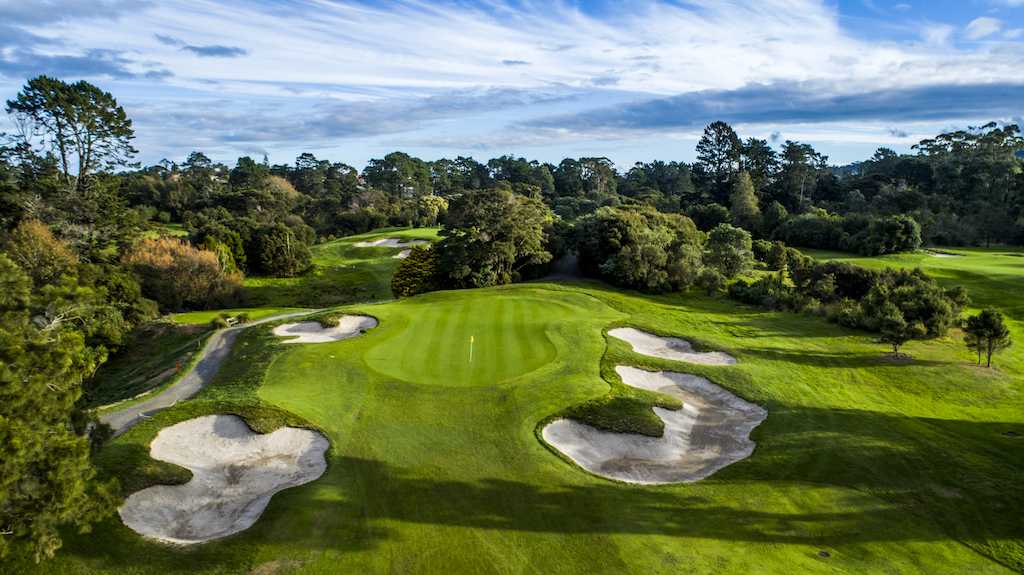 The Club was the third to be formed in Auckland, originally taking over the site vacated by Auckland Golf Club, who not long before had departed to a new home at the Middlemore course in Otahuhu.

New land was located at New Lynn, with a 130-acre site not only a wonderful location for a course but with excellent public transport links, an important consideration in times when cars were a luxury rather than the vehicle of the common man. The New Lynn course was formally opened on 29 May 1920. The Club continued to operate with two courses on two sites and rapidly grew at that time to be the largest in New Zealand.

It took several years to find an architect to redesign the New Lynn course, but the wait was worthwhile. Enter Dr. Alister MacKenzie, born in Yorkshire to Scottish parents, a man who had made his name designing courses both in his homeland and overseas.

He was on this side of the world overseeing a major redevelopment project at Royal Melbourne Golf Club, but through cable correspondence let it be known that he would indeed be interested in working his magic at Titirangi.
MacKenzie arrived in Auckland from Sydney on the passenger ship Marama on 4 January 1927. It was a measure of his genius that it took less than a week to analyse thoroughly the New Lynn golf links, assess its features and produce a full plan of the course and detailed diagrams of nine greens to be revamped.

In so doing MacKenzie at a stroke resolved all the issues that had dogged the Club since its inception, addressing the committee’s desire for a second starting place near the clubhouse and embracing the magnificent local features to come up with a master plan that the committee embraced.

MacKenzie departed New Zealand, never to return. He never saw his work completed, though that mattered not to the Club’s forefathers, who now had a very clear and exciting direction for the future and one on which they were anxious to embark.

Titirangi prospered, and over the years hosted three NZ Open’s and a number of other tournaments which confirmed the course as a layout of championship standard, and underlined the high regard in which it was held.

Exhibition matches, especially from professionals, were popular for a number of years, particularly early in the life of the course. Among the greats to have graced Titirangi are the legendary American players Walter Hagen (11 Major championships) and Gene Sarazen (a mere seven, but unlike Hagen one of five golfers to have won all four Majors). The South African Bobby Locke also visited several times and described Titirangi as New Zealand’s best course.

This, though, was only the precursor to the golden years that were to lie ahead as the Club became the country’s foremost tournament venue. From 1976 to 1992 Titirangi played host to a series of high-profile tournaments – most notably the Air New Zealand-Shell Open – that drew some of the world’s great golfing names.

Over this time the Club hosted the great Arnold Palmer, along with David Graham, Billy Casper, Nick Faldo, Bernhard Langer, Sandy Lyle, Ian Baker-Finch and the then current US Open champion Andy North. Many other household names also discovered Links Road, within all 19 winners of major championships taking part in these events.

The Club enlisted the services of one of the leading course architects of modern times, Chris Pitman, in the late 1990s. A disciple of the principles of MacKenzie, he drew up a master plan to return the course to its halcyon days. It was no small task. It reflected the importance of what was essentially Titirangi’s crown jewel – the course – its place in the history of golf in New Zealand and the necessity of preserving it for future generations as a reminder of just how good golf course design could be. The results, we hope, speak for themselves.

2016 saw the Club needing to engage the services of a new course architect trained and versed in the MacKenzie principles and doctrines as it needed to complete the restoration of the remaining two holes that had not been done in the 1990s and address some boundary safety concerns.

Clyde Johnson, a young course designer based at St Andrews in Scotland, who did his internship under Tom Doak, was recommended. He was commissioned by the Club and we are now in the process of completing this next phase of our restoration staying true to the original design of the great Dr. Alister MacKenzie.