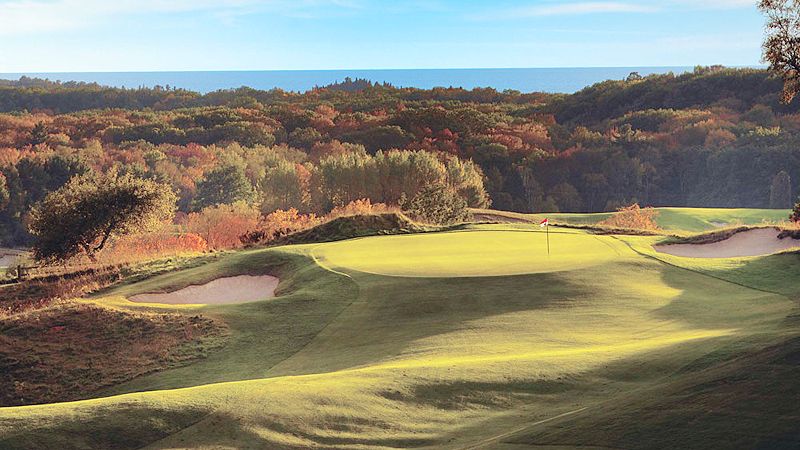 Mr. Ewing retained a brilliant Grand Rapids architect to design a unique clubhouse, perched on a high bluff above the big lake and overlooking Crystal Lake, too. That clubhouse has endured in essentially its original design, with the assistance of several careful restorations, and now overlooks the golf course as well as the two lakes.

But with this relatively quick and successful start of a new club and real estate development, the creative Mr. Ewing realized that something was missing. The fortuitous chain of events that followed and Alister MacKenzie’s subsequent role in the project are best described in Mr. Ewings’ own words…

“By the time we were in our first full season of play on the original Crystal Downs course, I had come to realize that quite possibly we had exceptional topography for golf and equally possibly we had muffed a rare opportunity for a truly great golf course. I wrote a long letter to Robert Hunter, author of a current book on golf architecture that had impressed me deeply. I described the Crystal Downs terrain in a way I hoped would stir his interest and asked him to recommend a golf course architect. In his reply, he wrote that Dr. Alister MacKenzie was, in his opinion, the greatest of them all and that our timing was perfect if we wished to see him, because he had just finished building the new Cypress Point golf course on the Monterey Peninsula and remodeling the Pebble Beach course for the upcoming National Amateur tournament.

“MacKenzie was about to return to London and, if I wished, he [Mr. Hunter] would attempt to prevail on him to stop off and see us on his way. I wired Hunter to please do this and the result was that Dr. MacKenzie arrived in Grand Rapids one October morning in 1928 on the sleeper train from Chicago, accompanied by his American associate, Perry Maxwell, who had worked with him on the California projects. MacKenzie was anxious to get back to England and was not at all keen about being side-tracked into Michigan, which he suspected of being an utter waste-land in terms of golf and which he had consented to look at only because of Mr. Hunter’s urging. So, we started out on the drive north with Dr. MacKenzie coldly courteous and obviously anxious to get it over with and with me rather frightened by the whole situation I had brought about. However, north of Muskegon I detoured from old State Highway M-11 to get near the coastal dunes in the hope that the sand hills would look a bit like English and Scottish seaside links country. It worked. MacKenzie and Maxwell could hardly remain in the car as we continued north through topography that allowed them to imagine an outstanding golf course every few miles.

“Crystal Downs created in Dr. MacKenzie an instant impression of near perfection, and his enthusiasm for its possibilities caused him to delay his sailing a boat or two and to settle in at nearby Zach’s guest farm for a few days of intensive course designing. He and Perry Maxwell worked almost around the clock until they had laid down holes and torn them up and laid them down again, emerging finally with the eighteen-hole layout that we know today.

“They did it largely in the spirit of an obligation to the land, because I had made clear to them on the first day that I had not yet even attempted to generate support for junking the existing course and that embarking on the construction of a new one was possibly too ambitious a project for a fledgling club. I had no idea how it could be financed. Nevertheless, MacKenzie and Maxwell went ahead, and MacKenzie, an excellent artist, painted detailed pictures for the contours of every green. They agreed that Maxwell would return in the spring to supervise the actual construction, and I agreed to see that they would get paid $5,000 for these services, an extremely moderate fee for their time and expense in view of their unmatched qualifications.

“Construction of the new Crystal Downs links commenced immediately, with play on the old course continuing until the new first nine was playable by the end of the summer of 1929.”

MacKenzie’s time at Crystal Downs spanned no more than about ten days, and he never returned to see the completed 18-hole course. Fortunately, he left behind his “Midwest Associate,” Perry Maxwell, who spent each summer at the property until 1933 when the back nine finally was completed. Maxwell faithfully followed the routing and green complex designs that he and MacKenzie had charted in the fall of 1928, but Maxwell’s own influence is also evident, particularly in the bunker shapes, which are more rounded than at Cypress Point, for example, and in the wildly rolling fairways, such as on the par 5 eighth hole that evokes images of Maxwell’s design at Southern Hills.

During World War II, only the front nine of the course was maintained due to shortages of fuel and able-bodied workers, although the greens on the back nine were protected by a planting of buckwheat and the routing was preserved. After the war ended and the back nine reopened 1947, the relatively remote club experienced a long period of financial struggles and absence of a full membership. The silver lining, though, was that there were no funds to make changes in the course that city clubs flush with cash were prone to do under the leadership of ever-changing boards and green committees.

Until the mid-1980s, Crystal Downs often was referred to as Michigan’s “hidden gem” by the small group of avid golfers who recognized the significance of the course’s heritage and thrilled at annual pilgrimages to the course to experience the speedy undulating greens, rhythmic routing, sparkling lake views, and challenging play.

That lack of notoriety changed in 1986, though, when a young Ben Crenshaw took a day off from the Buick Open, being held about 230 miles to the south at Warwick Hills in Grand Blanc, Michigan, to take a private jet to Frankfort and experience Crystal Downs with a local acquaintance. Not only did Ben go on to win that year’s Buick Open, but he followed his victory with public comments and articles about his great time at Crystal Downs and his admiration for the course design.

By 1989, fueled by greater publicity, expanding interest in golf and good economic times, Crystal Downs reached full membership and began to accumulate a substantial waiting list. Moving into the 1990s, and for the first time in almost seven decades, the club had the capital to spend on the golf course. But reminiscent of the fortuitous circumstances that brought Alister MacKenzie to Crystal Downs, the club was about to experience another historic and critical event. During a three-day gathering at Crystal Downs, attended by members from seven MacKenzie designed golf courses, the Alister MacKenzie Society was officially formed and incorporated. The accumulated golf wisdom, dedication, camaraderie, and enthusiasm of those founding members have since sparked a movement of preservation and restoration that has saved the brilliant design work of Alister MacKenzie at courses he touched around the globe.