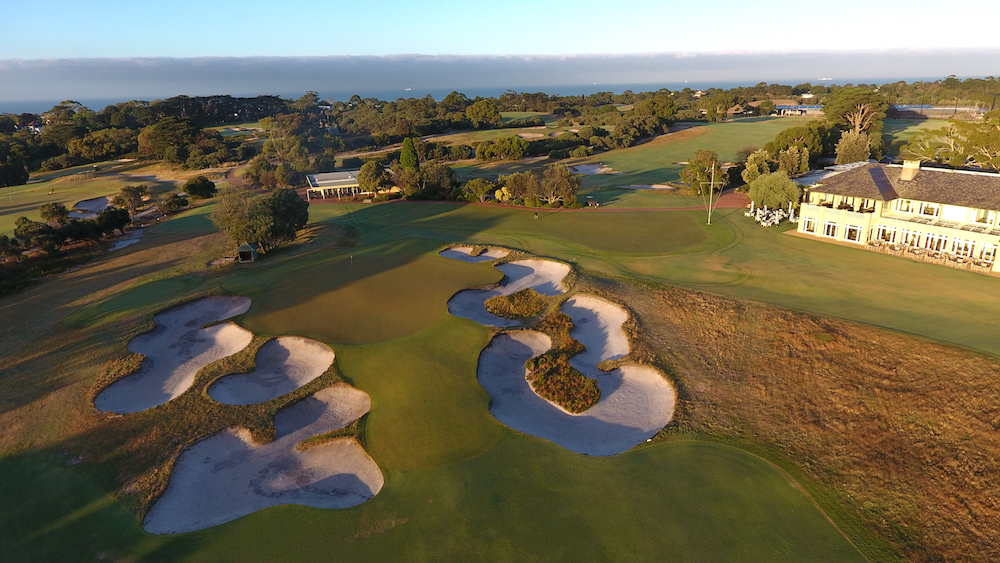 In 1898 the club purchased land that had previously used in training racehorses and began the long arduous task of clearing the ti tree and scrub and forming a new course which opened in 1901. Further parcels of land were purchased over the next number of years and the course was changed to suit the new layout.

In 1911 more land was acquired which enabled the club to move the clubhouse and create a new course. To finance this some excess blocks of land acquired along the way were sold. The new project began and this leads us to Dr. Alister MacKenzie.

“Can I please have a list of all the Club Members names, ages and handicaps….? With these words, Dr. Alister MacKenzie commenced the preparation of plans for the West Course of Royal Melbourne Golf Course.

It was to become one of his crowning achievements in a brilliant career designing golf courses worldwide.

The reason for MacKenzie’s request for this list was simple, it adhered to 13 principals published in his book “Golf Architecture” in 1920.

Without going into all of his ideas here, it was point 12 that adequately summed up what he was trying to achieve in his design:

“The course should be so arranged that the long handicap player, or even the absolute beginner, should be able to enjoy his round in spite of the fact that he is piling up a big score.

The finished result was a testament to his brilliance. With its bold bunkering, multiple approaches to the greens along wide fairways and strongly contoured greens hemmed in with mounds and slopes which extended into the greens themselves MacKenzie believed that putting should be hazardous and that a golfer’s approach shots should be tested by greens which offer an easier side and a harder side to the hole.

Hale Irwin said that the one difference between his rounds of 64 and 75 at the 1978 Australian PGA Championship was that he was below the hole with his approach shots in the former round and above the hole with them in the latter round!

The Club president, LKS Mckinnon, who was visiting London and authorised by the club to find a course architect, approached the R&A, and after taking advice, MacKenzie was appointed to create the new course at Sandringham for a fee of 1000 guineas.

Alister MacKenzie arrived in Melbourne on the 25th October 1926 and quickly endeared himself to the Australians.

A big bluff strong man, his unaffected candour, positive manner and enthusiasm for nature, along with his ability to sell himself, won him many admirers, and his remark that no city of comparable size in Britain had as many first-class courses as had Melbourne struck a chord with Melbourne’s golfing fraternity who were more accustomed to international visitors making disparaging remarks about the local courses.

MacKenzie started immediately so that within a matter of weeks he had designed the 18 hole layout of the West Course. While in Melbourne, MacKenzie formed a partnership with club member and future course designer Alex Russell. MacKenzie’s plans were accepted by the Club and Russell, together with another member, were appointed to put MacKenzie’s ideas into effect and commence construction. MacKenzie was never to set foot in Australia again.

In Russell, MacKenzie had a man who could interpret and realise his sketches. Given that MacKenzie was in Melbourne for only a short time, the input from Russell to carry out MacKenzie’s plan should not be understated.

Russell enlisted the help of Royal Melbourne Greenkeeper Mick Morcom to construct the course and both men did such a good job of carrying out MacKenzie’s instructions that MacKenzie himself said to the Golf Digest in 1927 “The Royal Melbourne Golf Club have the good fortune to have the best greenkeeper I have come across in Britain, America or Australia. A man called Morcom- and I have managed to persuade most of the golf courses in Australia to secure his services for the purpose of helping them with their construction” High praise indeed from Dr. MacKenzie!

Alex Russell, together with Morcom’s help, went on to design the renowned East Course using the MacKenzie principles and what he had gleaned from the Doctor in the time he was in Melbourne. Out of the East and West courses (which stretch over a number of roads surrounding the course), has evolved the world famous Composite Course. A course made up of a combination of holes from the East and West Course that do not cross any roads and remain on the “course proper”. The composite course has been used in many prestigious events over the years starting with the Canada Cup (now known as the World Cup) in 1959.

In recent times the composite course has hosted two President’s Cup events, in 1998 and 2011 and it is to host it again in 2019. A great honour, as no other course around the world has held it more than once.

Dr. MacKenzie’s ideas and philosophy on how a golf course should be played and maintained has stood Royal Melbourne in good stead throughout the years. With today’s professional players able to hit the ball so much further due to the advancement of ball and club technology, Royal Melbourne has successfully withstood the challenge that a course needs to be continually lengthened to keep up with technology. It is a stern test for a golfer who wants to take a shortcut to improve his score. Risk, reward for the golfer who chooses to take the safer path and perhaps give up a shot in the process. This is what Dr. MacKenzie achieved at Royal Melbourne.