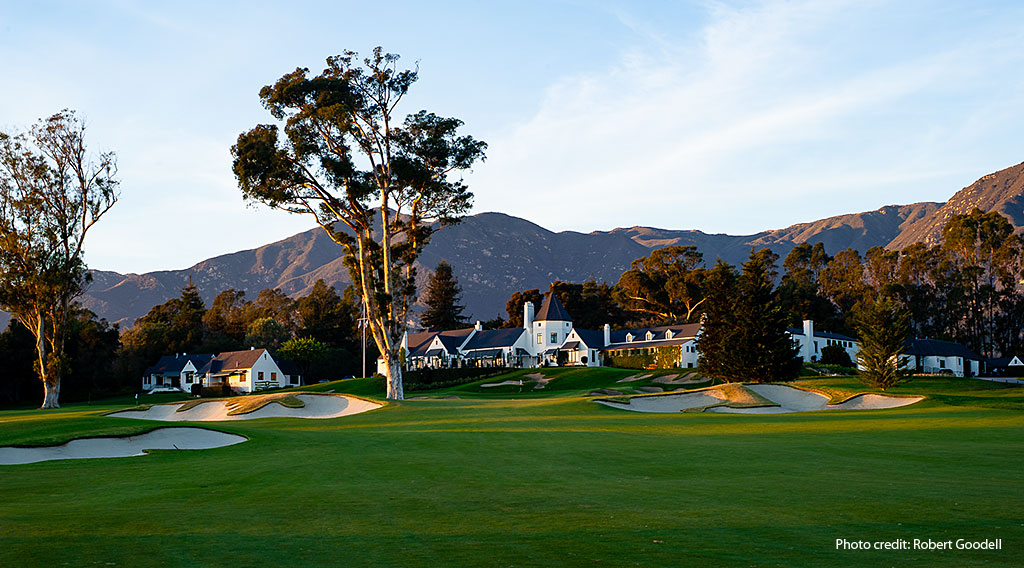 The Valley Club of Montecito was founded in the summer of 1928 by a group of Santa Barbara golf enthusiasts witnessing the beginning of the Golden Era of golf architecture in California. Many new courses were being built in the state and several of the founders of The Valley Club heard of the wonderful work Alister MacKenzie was doing at Cypress Point, Meadow Club, and Pasatiempo. An entry in The Valley Club Board of Directors meeting of November 21, 1928, related that board members were to ratify and approve an agreement entered into by the club with Alister MacKenzie and Robert Hunter and the American Golf Course Construction Company.

One of the founders of The Valley Club gave a report to the Board in July 1929 stating that the golf course “had been laid out under the direction of Hunter and MacKenzie. It is safe to assume that this course will be absolutely ready for play in time for the winter season.”

And, in fact, The Valley Club did indeed open on December 30, 1929. A great deal of fanfare and publicity ensued. Several golf magazines wrote glowing articles about the club stating that “the new links with its gentle contours and soft flowing lines invite the golfers to leisurely stroll the country reminding one of an English park.”

Golf course architect Tom Doak, who oversaw a renovation of the course in 2007, said that, after seeing and studying The Valley Club, he realized that if he could describe an ideal piece of land for a wonderful golf course, he would find one that had three hills on it. The Valley Club has three hills on it. First is the hill where the clubhouse and golf shop are located and where the 1st tee starts that offers a downhill tee shot to begin the round. The same hill has two greens at its base: the 15th green and the 18th green. Between these is the 16th tee which takes the golfer away down the hill for a 3-hole loop before returning to the finishing hole.

Further out on the golf course is a second hill into which the 3rd green nestles and uses the top of the hill for the 4th tee to a downhill par 3 and for the 8th tee to an uphill par 3. The 10th green eases into one side of the hill and after a very short walk golfers are on the 11th tee looking down at another beautiful par 3 hole. The third hill is where the 8th green is located, as well as the 9th tee, and it also separates the 7th fairway and the 10th fairway.

Having this piece of land available in 1928 was fortuitous and allowed Dr. MacKenzie’s magic and wonderful design techniques to be fully displayed utilizing a tantalizing hourglass routing. The round begins on a hilltop at the magnificent Carlton Winslow clubhouse and continues through the surrounding Santa Ynez foothills and Picay Creek with occasional views of the Pacific Ocean and the Channel Islands.

It is well known that Dr. MacKenzie was an expert in camouflage and gained this expertise during the Boer War. This is illustrated at The Valley Club by standing on any green and looking back up the fairway. All of the bunkers that were so evident as you were approaching the green totally disappear from view when looking back at the tee. If a fairway bunker blends imperceptibly into the landscape and it is difficult to detect the hazard’s exact location, then Dr. MacKenzie accomplished his goal.

Dr. MacKenzie is quoted as saying “I try to build courses for the most enjoyment by the greatest number.” In August 2012, Golf Digest magazine listed the 50 most fun to play private golf clubs in the United States. Three MacKenzie courses were in the top 15: Cypress Point, Augusta National and The Valley Club of Montecito. As to The Valley Club, the article said, “What this golden-age Alister MacKenzie layout lacks in length, it more than makes up for in design variety, atmosphere, and scenery.” Many say that when one takes Santa Barbara weather into the calculation, it may well be the finest place in the world to play golf 365 days year.